Should someone still celebrate Father’s Day even when his or her father is no longer around?

Mother’s seem to have cornered the market on the parental recognition/celebration front. Statistics show people spend 41% more on their mothers for Mother’s Day than on their fathers for Father’s Day. Does that mean mother’s are better or is it just they’re better at PR and marketing?

My generation’s mothers were often viewed as the power behind the throne. Dad was allowed to look like he was running the show but inside the family it was pretty clear who kept the trains running on time. Within the confines of those four walls even dad would acquiesce to mom by saying, “Ask your mother”.  That one statement has been the butt of many a joke. It could even be said it’s a national punch line. “Go ask your mother” seemed to illustrate a perceived avoidance of responsibility or just simply the recognition that dad didn’t have clue.  Which couldn’t be further from the truth.

If you think I’m down on Dad’s I’m not.  I respect the institution and the job. Talk about thankless. For years they are regaled to behind the camera, at the grill, or away at work. Kids hardly acknowledged dad except for Father’s Day or when they needed money, a human ATM.

You might be asking yourself, what does fatherhood and Father’s Day have to do with work? Well, my father taught me to work and my work ethic. Those lessons have served me well, even to this day.

Dad was big on personal responsibility and self-reliance. Being an older father when I came along he didn’t have the patience for excuses. He expected me and my brother to do what was expected of us. No questions asked. Like many rebellious children, I didn’t always meet those expectations.  My life has been a series of nontraditional choices. I went into the military and then work. I didn’t just want to work but I wanted a career. I don’t doubt dad would rather I had gone a more traditional route.

Sometimes I find myself wondering if dad wanted me to be a “traditional woman” why did he raise me so nontraditional, for the time. He taught me things, girls of the time didn’t learn. He taught me to change a tire, and my oil. He would talk to me like an equal on historical and political topics. He held me to the same standard as my brother, and in some things higher, like driving.

It’s been about 14 years since dad died and when he died I’m sorry to say we were not on the best of terms. You might call our relationship an armed truce. Even though he’s gone, I still think of him often. There were a lot of hurt feelings but time heals over those open wounds. I know he did the best he could, in the context of the times. So this Father’s Day as before, I feel the need to say, “thank you dad”. Thank you for making me, me. I don’t know if you meant to make me this ambitious, compassionate, driven person but I salute for it, along with all the other fathers who quietly and thanklessly give to their children. 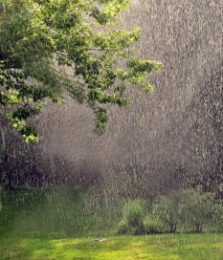 What is it about a rainy day that makes one pensive, maybe even a little restless? Who knows, maybe this restlessness is rubbing off onto me from my dog.  Poor thing hates the rain. She associates it with lightening and thunder.  I can see it in her eyes, she anxiously anticipates that flash of light and the clap of thunder. Expecting something bad to happen even though it doesn’t. Sounds like some people I know.

I’m starting to think, this restlessness may be more resentfulness. After all, the rain has forced me to stop and rethink my day. I hate that. I had a busy day planned. I wanted to do some yard work, wash those doggy nose prints off my windows, get the floors mopped and do some grocery shopping. Now, all that will have to wait for another day. Knowing there is “work” stacked up, like airplanes at Dulles, would make most grown ups antsy and grumpy.

I want to point out, I wasn’t always like this. I still remember a time when a steady summer rain like today just made me feel safe, sheltered, and at peace. (Despite being “cooped up” with my little brother. Sorry baby bro.) I would sit in my room, or under the protected patio playing dolls or reading and listen to the rain patter on the roof. God I loved/love that sound. As a child, subconsciously I just knew and accepted rain was nature’s way of renewing it’s self. It was a break, a “time out” from the things that needed to get done, like floating rafts down the creek, building huts of field grass, climbing trees, skipping stones, and playing kick the can until you couldn’t see the can any more. I wonder, why I can’t embrace this “break” as an adult?  When did I lose the appreciation of renewal and just looked at it as annoyance?

I recognize, if I want balance in my life I need to rediscover those things I innately knew when I was a child. I need to work on peeling away the decades of stain, varnish, and paint that are layered on and reveal the original wood beneath.

So, just for today, I’ll embrace this “rain delay” in my life.